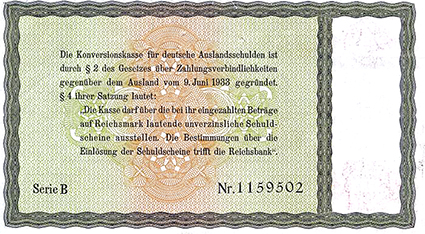 In a collection of World War II coins I acquired this week was a fine example of a Konversionkasse, 5 Reichsmark note, dated 1934 and issued by Nazi Germany. Beginning in 1934, all Jews who were able to emigrate from Germany were barred from withdrawing significant assets or funds. Instead of their assets, they received the “Konversionskasse”, a kind of promissory note supposedly backed by the Reichsbank, but in general it was impossible to redeem them. In 1933 most Jews were able to withdraw their assets upon leaving Germany, in 1935 conditions worsened considerably and at most 10% of the value was refundable.

Besides the Konversionkasse, German Jews in the early years of the Nazi regime were attacked with various levies and taxes intended to impoverish them. In April 1938, an executive decree required Jews to declare all assets valued at more than 5,000 Reichsmark. A 20% tax levy was then imposed on all Jewish-owned assets. In addition, on November 24 and December 3, 1938, a decree authorized the confiscation of Jewish property in preparation for war. The last decree authorized the confiscation of Jewish businesses at will. Jews were also forced to sell properties demanded by the authorities at far below market prices, paid with the Konversionkasse, which were in fact worthless.

Next Counterfeit Detection Market with In-Depth Industry Analysis Report on Trends, Growth, Opportunities and Forecast to 2028