HEART OF ALENE — Aiden Alderson was among the first to complete Saturday’s foot chase in McEuen Park, which sees citizens attempting to beat up Idaho State Police troopers.

But there was one soldier he couldn’t catch: his father, Richard Alderson.

“He was the soldier who beat me,” Aiden said.

Little sister and brother Shelby and Archer Alderson were not far behind.

“We beat him,” said a smiling Archer, pointing to another FAI soldier.

About 50 men, women and children participated in the fundraiser for court-appointed special advocates in northern Idaho on a cool, rainy morning.

The 5k race, in its fourth year, began with a siren and FAI captain John Kempf shouting, “Stop, police!

Hayden’s Scott Giltner and his dog, Grace, won easily in 19 minutes and 19 seconds.

Giltner adopted the Border Collie/German Shepherd mix two years ago from the Kootenai Humane Society. They have been best friends ever since.

“She’s my secret weapon, always excited to race,” Giltner said. “The bond we have is unlike anything I’ve ever known. We seem to energize each other.

Coeur d’Alene’s Lana Lawrence, who started the day with a half-mile swim in a cold Coeur d’Alene lake at Sanders Beach, was the first woman to finish.

She was happy to come out and support CASA.

Kristin Ludwig, director of development at North Idaho CASA, said their workload was increasing and donations were steady.

The funds will help programs like Birthday Books, which provides every CASA child with books for their birthday; and Learning Lab, which connects students with teachers to overcome barriers to education.

Despite the weather, people were in good spirits, Ludwig said.

“We had a great turnout,” she said.

Team Hoyt’s Umo Rivera pushed Anette Enger in her racing wheelchair on the out and back course through City Park.

“My medal is the smiles on those faces,” Rivera said, pointing to the kids at the finish line. 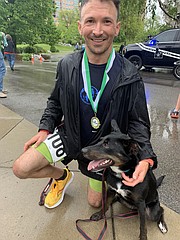